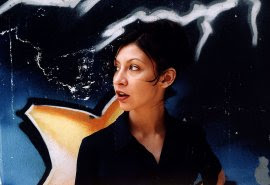 When both Misterblog and Roar commented about Suburbia and Spring in the Marina Celeste-post, I had to check out these bands. Spring was a shortlived French band fronted by Alex (pictured), a darkhaired beauty with a offkey, but sexy voice that was born in Madrid. They released quite a lot of music via Spanish Elefant Records. Gentle, well-crafted popmusic with various references, from The Beatles to bossa nova. They collaborated with fellow Frenchies Indurain, a duo consisting of Jerome Mestre and Marc Collin. The latter had played in various Versailles bands, like Orange, with guys that would later form Air, or become known as a soloartist (Alex Gopher). Alex-from-Spring was once in a band called Rosa Luxembourg, also from Versailles. When Spring fell apart, Collin worked with Alex in Suburbia, a more danceable project. Think of mix between St. Etienne and Kylie Minogue (alas not in French).

When I tracked down the Suburbia-album, I thought it would be nice to do a big post on Marc Collin - with Serge and Benjamin Biolay a guy that pops up very frequently on this blog. A nice occassion is the recent release of Nouvelle Vague's contribution to the LateNightTales-compilation series. As you know, Collin is one of the masterminds behind NV, for LateNightTales they had singer Gerald Toto do a bossanova-version of Dexy's Midnight Runners' Come On Eileen.
Before Nouvelle Vague, Collin started Ollano in 1996, a triphopjazzy project with singers like Sandra Nkake and Helena Noguerra. The only Ollano-album is still a gem. More proof that Collin knows how to set a mood comes from his imaginary-soundtrackalbum Les Petroleuses (with music inspired by John Barry, Morricone and Gainsbourg, and featuring vocals by Camille, who later sang on the first Nouvelle Vague album) and the actual soundtrack for the movie Les Kidnappeurs, that was also used for Divine Intervention.
But Collin likes to turn up the bass as well. He worked with Avril, was part of Dirty Jesus (Collin does work alone, but usually is half of a duo) and together with Ivan 'Blackstrobe' Smagghe he is Volga Select. Dirty Jesus stands for deephouse, Volga Select likes it darker.
Collin produced many artists, most of them released fine music. But sometimes his internal quality control fails him - otherwise I can't explain the two godawful covers he produced for Clémentine on her Lumière album. So instead of a bossanova'd version of The Beach Boys' Kokomo, I rather give you Beth Hirsch's Camden. A tender ballad with a twist. But not a twisted as the distorted, aggressive electrowave of Sir Alice.