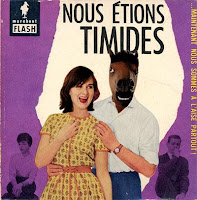 If it smells like Stereolab, I'm all ears. Belgian duo Soy Un Caballo (I am a horse, in Spanish) had their debutalbum produced by Sean O'Hagan, they use vibraphones, Fender Rhodes and Wurlitzers and have a French chanteuse (Aurélie Muller). Even Will Oldham comes by for a duet. Les Heures de Raison was released in June on the small, but sympathique Matamore-label. The understated, dreamy atmosphere reminds me of Juana Molina - like with her, it takes a while before Soy Un Caballo's songs start to grow on you. But they do.