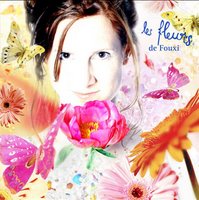 How impressive a year living in France can be, is illustrated by Les Fleurs de Fouxi. Munich-based actress and singer Fouxi went abroad for a year and came back with a big love for the French language. She decided that her music combined perfect with her low, husky voice when she sang in French.
Music-wise, she was brought up with Zarah Leander, Beatles, Italo-pop, De-Phazz, Prince and more recent French artists like Biolay, Camille and Francoiz Breut. Her music has a laidback downtempo-flavour, but can be pretty intense. Listen to Au Trajet on her MySpace-site.
For some reason, German labels haven't signed Les Fleurs de Fouxi, although Thomas from Le Tour is considering Le Hawaii Interieur for his upcoming compilation. Good, for more people should hear Fouxi.