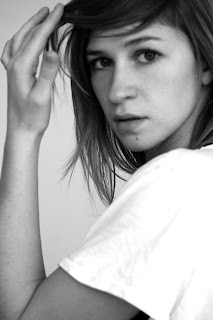 I am such a lucky guy. Really. Almost everytime I open my mailbox, there are fresh albums by fresh French girls waiting for me. Beautiful girls, making beautiful music, usually. Both Maud Lübeck and Claire Denamur (pictured) are born out of exotic bloodlines. Claire has Argentinian, French and Dutch roots. She grew up in America, but (luckily) chose to sing in French. Her debut-album (highly anticipated here before) is a gem. Jazzy, folky, funny, and sung with that country-ish, tad husky voice that reminds me a little of Janne from Room Eleven. First single Prince Charmant was real good, I'm hoping for Je me sens nue as the follow-up.
Maud Lübeck states Antarctica and Paris as her hometowns, my guess is that there's some German roots as well. We know Maud from the X-mas project, none other that Vincent Delerm took an interest, they both recorded a very moving duet.